I received a message a few days ago, Glezos died. Not possible, I thought, he didn’t even warn me. We had just arranged to meet on Saturday in Athens for a shot of tsipouro. Manolis is a man of his word.

In Syntagma Square, meeting place with Manolis, I’m walking around wondering about the past and the days to come.

Right here eight years ago on a gloomy Sunday, thousands of Greeks were invading the streets to stand against the new enemy, the Troika.

That very day at Syntagma Square an old man was gazing at the Parthenon with shiny eyes and his white moustache hidden behind a face mask.

The Greek people have no more blood to give, he shouted, we must say NO, OXI! to these shark loans and this asphyxiating economic policy!

Sixty-eight years before, he was taking down the Nazi flag from Parthenon. It was the very first act of Greek resistance to the German invader. In 2012 he would find himself breathing tear gas in front of the Hellenic Parliament, at the “Constitution Square”.

I see him coming through the fog shaking his hands, this time without a face mask.

There’s a little tavern located in a tiny street of Exarhia, shutters down with a red spray-paint writing on them, Η Ελλάδα λέει ΟΧΙ, Greece say NO. Manolis lifts the shutters and we’re in. We get the lights up, some mezèdes, a flask of tsipouro on the table and we sit.

The first toast is always to his comrades fallen in battle.

How can I forget those people, how can I?

So, dear Manolis, is it true you’re dead?

I am, but you will never get rid of me, I will follow you and call your conscience to account! Besides, that coffin was too narrow and I wanted to have a shot.

You have always been disobedient…

If you ask me something “fair enough” by an order, I will not obey.

I had the mis-fortune to have my mother as a teacher for a couple of years in primary school. She used to tell me, You must learn the times table, I would reply, But Mom why should I, it’s all written on the back of my notebook!

Then, she would slap my hands with a wooden stick, but despite the beating, I never learnt the times table, and still I had excellent Math admission grades at university.

It wasn’t stubbornness, just consistency with my principles.

Let’s talk numbers! According to an estimate by the Bundesbank, from 2007 and 2019 the Deutsche Federal Government saved more than four hundred billion thanks to the BCE monetary policy. It seems like now they would be able to pay their WW2 debts to Greece.

Actually, for the sake of precision, the war debts amount to 575 billion. When I was president of the National Commission for the collection of war debts I had the pleasure to spot the same results in evaluations made by distinguished European economists. Jacques Delpla is a member of the Economic Analysis Committee for the French government and his results are in line with ours.

It is a battle for memory. The first case in which Greece is a creditor to Germany. At the end of WW2 countries like Italy, Bulgaria and Germany signed a deal with the commitment to pay all the damage caused to occupied countries during the war. Italy and Bulgaria fulfilled their commitment, whereas Germany systematically refused to pay their debt to Greece, despite having provided compensation to Poland and Ex-Yugoslavia. Why should Germany be in the position not to honour their obligations?

A battle for justice.

Right! I always claimed that we Greeks must know to whom we owe and how much exactly. What our creditors have earned from interest rates should be deducted from our debt. After all Germany is debtor to Greece. Do you know how much they owe us? 162 billion!

German authorities do not seem to have long-term memory, where is the truth?

So, what is truth but the denial of oblivion? How can we forget our past?

Those who forget their past get lost and have no future.

In the region of Attica during WW2 we reported 400 deaths a day, I can tell this with a high degree of accuracy because at that time I was employed at the offices of the Red Cross.

The sacrifices of the Greek people were huge, over one million war victims from 1940 to 1944. One of the few countries ending up with a reduction in population size.

In the last years it has been necessary to fight another war, this time against austerity measures inflicted by IMF, UE and BCE. As you were rightly shouting at Syntagma Square, Greece is being suffocated by restrictive economic measures and Memorandums imposed from the outside… How can memory help today?

Without solidarity Europe is destined to extinction. Unless Europeans want to endorse the vision of Walter Funk, Hitler’s finance minister, who first thought of a European Economic Community so that the 3rd Reich could control its fate once Nazi supremacy was established in the Old Continent. Let’s not forget that Nazism was defeated and Funk was arrested, tried and condemned as a war criminal in Nuremberg.

We must realize that today’s Europe needs a great deal of effort in order not to become Walter Funk’s Europe. If we assert that Nazism has been eradicated, we have to prove it every day, that’s why the German government must not withdraw from paying us back.

The origins of the European Union seem to be much closer to what Walter Funk had imagined. In the United States a civil war led to the Constitution and the democratic system, in England the conflict between kings and nobles gave birth to the Magna Carta. The European Community was born with an agreement to encourage the free movement and trade of steel and coal between countries.

Now that we have talked about the past and since you’re dead, would you be able to predict the future?

The European Union of today has nothing to do with the ideas we supported in 2014, when we were running for the European Parliament with Syriza.

Instead of a Europe of peoples and citizens, fair-minded, pacifist and in popular sovereignty, we are faced with a Europe of NATO, enslaved to the interests of the USA.

As I said during a press conference with German Die Link, although Nazism has been defeated, it appears here and there, within state bodies, European and international institutions. Our goal is the emancipation and self-determination of all peoples, the conquest of human rights for all citizens of the world. In particular, for us Europeans, we want a Europe of peoples, based on the principles of equality and peace. This has to be our future if we do not want Europe to fall into oblivion.

Despite the world-famous OXI of the Greeks that filled the hearts of many European citizens with love for democracy and hope, Alexis Tsipras failed to resist the threats of the Troika. And eventually you had to apologize to the Greek people for taking part in that illusion.

It is true, but we have to keep fighting for our ideas. As I said in the European Parliament, history is knocking on our door, we have to decide whether we are going to open the door or keep it close. We must open it before it’s too late. The 2015 referendum, in which 62% of Greek citizens voted OXI was an outstanding act of democracy and the idea was that there can be no compromise between oppressor and oppressed, nor between slave and master. Freedom is the only solution.

Nevertheless, it was a sweet illusion and the Greek people once again proved their resistance to injustice and misery. Even today, during demonstrations around Europe, the Greek flag is used as a symbol of struggle against oppression.

As you know, what we Greeks put above all else is resistance and participation, not the outcome of the battle. We are the only people not celebrating victory but the beginning of the fight! That is the courageous assumption of the risk, and participation. That’s the meaning of March 25, the day of the revolution against the Ottoman Empire, and of October 28, which is the beginning of our fight against Nazism.

History indeed has excellent antibodies dear Manolis, but what prospects for the economic disaster that we continue to witness in Greece?

Greece can emerge from the crisis. First, we must reduce the waste that continues so far in the various ministries. After that, we have to fight tax evasion. Finally, if necessary, we’ll have to resort to a forced internal loan for incomes exceeding a certain limit, let’s say one hundred thousand euros. An internal loan is much better than the usurious rates affecting our public debt.

“Left” is a lexical morpheme. It was used in the French Parliament because on the left sat those with subversive ideas, ριζοσπαστικός, the one who breaks the roots, intended as conventions rooted and considered as pillars of society.

So who is the leftist? Not he who walks on the known path, but he who builds a new one.

The State is a thing, but power is on the streets. When some time ago I was involved in a documentary project on Thomas More, “Back to Utopia”, by Belgian director Fabio Wuytack, they said I was the last utopist, I replied that I was not the only one.

What is there after death, Manolis?

Regarding those two “heroes” of Aachen, in an interview for Der Spiegel they sustained that it was a mistake to have accepted Greece in the EU. To be honest, Giscard admitted, Greece is basically an Oriental country. And Schmidt added, During the Maastricht Treaty, the 12 members of the EU made the mistake of admitting anyone into the monetary union.

Like I said on behalf of the Greek people in the European Parliament, Europe does lexically, morphologically, conceptually and essentially, originate from Greece. And we’re not giving Europe away!

Can we state that Greece is the Mother of Europe?

The strongest memory of my life is my mother. I have been countless times asked to tell the story of the Nazi flag taken down from the Parthenon, but what I remember most of that day is my mother.

When I got home that night, long after midnight, I found her waiting at the door… I shouted, Mother! She jumped at me and took me by the throat, Where have you been?

I opened my jacket and showed her a piece of the swastika we had torn. She hugged me, kissed me and said, Go to sleep.

A mother knows what is right.

Dear Manolis, tsipouro is running out. Are you afraid?

I reached the sources of the seas, I explored the depths, I saw the gates of death wide open above me.  I faced death. I have seen and discovered, watched and explored but I never had a shred of fear in my heart. What scares me is the hatred of people.

Socialist heaven is waiting for you Manolis… Bakunin and Marx are there, who knows, perhaps one day we’ll meet up there to drink a shot of tsipouro, all together.

The vision of socialism is very old.

When the Theban messenger, κήρυξ, visited Athens, he asked, Who is the tyrant here?(τύραννος, governor). Theseus replied, There’s no tyrant here, Tyrant is the demos, δήμος, the citizens.

Do you think there is still room for the Socialist Dream?

If European peoples cultivate memory and love for truth, that won’t be only a dream.

“We are not in mourning, we do not cry, we do not break down. Every poem, every song aims to bring the deceased back to us, start a dialogue and talk about today and the days to come” 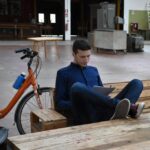